This is the first of three notebooks about the CAMELYON17 challenge. In this challenge, the task is to predict a patients pN-stage (pN0, pn0(i+), pNmi, pN1 and pN2). The pN-stage is determined by the lables of the five slides corresponding to the patient. Once the lables of the individual slides are known (negative, itc, micro, macro), the patient's pN-stage can be looked up in a table (see the official CAMELYON17 website). So the real difficulty of the challenge is to predict the labels of the slides.

Unfortunately the training data here is very limited as we have only 500 slides from the CAMELYON17 training set and 130 labled slides from the CAMELYON16 test set (labled with negative, itc, micro, macro). So opposed to the task of the CAMELYON16 challenged where we had thousands of tiles and only two different labels (normal and tumor), we will not be able to supply another CNN model with sufficient data. Even worse, for the itc class, we only have 35 examples in total.

To tackle this problem, our approach is to make use of domain specific knowledge and extract geoemtrical features from the heatmaps, which can be used to train a less complex model, e.g, a decision tree.

In this notebook you will be provided with heatmaps of slides of the CAMELYON16 test set and the CAMELYON17 set. Using them has some advantages over the heatmaps you might have created in the last notebook:

The heatmaps of the sldies were created with a CNN. Each heatmap represents a Whole-Slide-Image (WSI) of tissue. A WSI is approximately 200.000 x 100.000 pixels big. Each slide was cut into 256 x 256 pixel tiles. The CNN was trained to predict these tiles whether they contain tumorous tissue or not. One pixel of the provided heatmaps represents the prediction of the CNN of one 256 x 256 tile.

For more information have a look at the deepTEACHING website, or the official homepage of the CAMEYLON Challenge.

To get a first impression of the heatmaps, we will first load and view one. A pixels value describes the "degree of believe" of the CNNs, the region contains tumorous tissue (1.0) or not (0.0).

Executing the next two cells should show the following images:

In total we will extract 6 features of every heatmap:

The first to features can easily be extracted without further processing:

Implement the functions to extract the features.

In order to extract the next four features, we must clearly define which value between 0.0 and 1.0 (and above) we believe is tumorous tissue.

A logical value would be 0.5, since that is the value the CNN used as decision boundary when it was trained to predict if a tile of 256x256 pixels contains tumor or not.

Implement the function to transform a greyscale image into a binary image.

Implement the function to extract the feature sum_pixel_after_threshold. In other words, the area that is left.

Now the last three feature can be a bit tricky. First we need to find the biggest object in the image. The biggest object means, the largest area of connected pixel. A pixel is connected to another if it is the very next pixel to the left / right / up / down.

After we identified the individual objects (areas of connected pixels), we need to extract their features:

Implement the function to identify objects (connected regions) in a binary image and to extract their features.

If you cannot manage to extract these three features you can proceed with this notebook and the others following only using the first three features, though classification results at the end of the series of the notebooks will not be as accurate.

If your implementation is correct, the output of the cell below could look similar to the following:

Then we can just sort the objects according to the feature object_sum_pixels to get the features of the biggest object:

Extract features of all Heatmaps

Now we have everything we need to extract the six features from the heatmaps.

Extract all six features from all heatmaps and combine them with their labels (negative, itc, micro, macro) in a pandas DataFrame

For the next notebook, it is crucial to add the data in different pandas DataFrame objects:

Executing the three cells below should show output similar to the one in this picture: 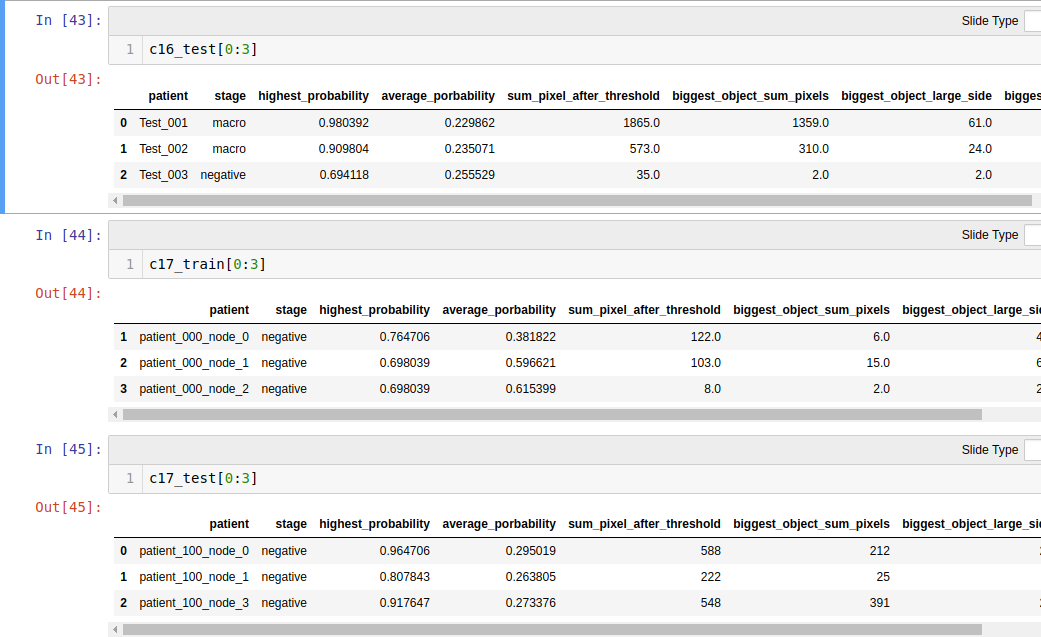 Next we will train a simple classifier with the features we just extracted.

Possible improvements for this notebook:

If you want to add complete new features, it is always a good advice to know about the domain, so you do not extract arbitrary features, which have nothing to do with the classification decision. Read the corresponding section on the CAMELYON website, how real pathologists decide about the label (negative, itc, micro, macro) of a slide.