This notebook aims to provide an introduction to Recurrent Neural Networks (RNNs).

First, we'll at the so called Reber Gramar. A simple artifical grammar, which is easy to understand and relatively low concerning computational effort.

Then we will go through the theory of RNNs step by step, while at the same time constructing the network.

At the end of the notebook you should have a basic understanding of vanilla RNNs. We won't be dealing with Long-Short-Term-Memories (LSTMs), the advanced RNN-cells.

The reber grammar can be used for generating artifical data for the evaluation of recurrent neural networks.

A valid string can be generated by the following automaton. 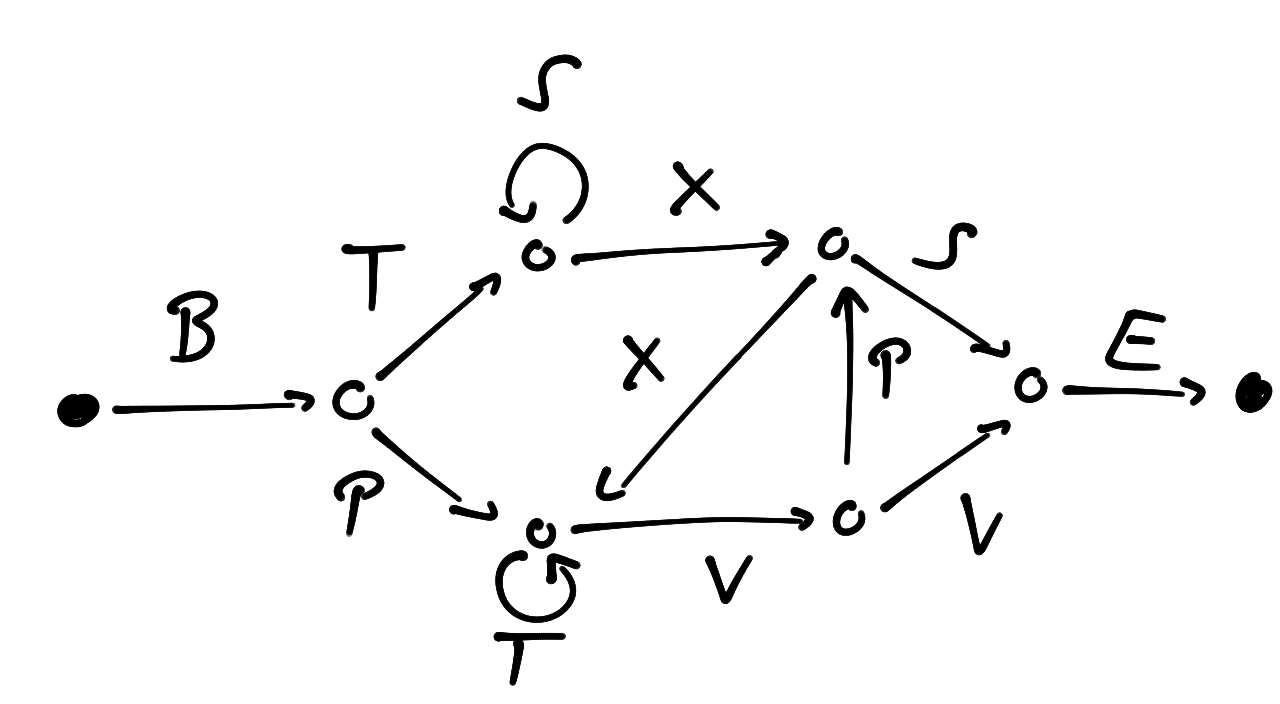 Example: BTSSXXTVVE is a valid string in the grammar.

Sidenote: The reber grammar was first introdcued in 1967 in [REB67]. Its purpose was to study implicit learning of grammatical rules.

The cell bellow shows how to use the code. get_one_example(minLength=10) produces 2 output sequences in one-hot-encoding:

The functionsequenceToWord can be used to transform one-hot-encoding back to characters.

Finally, the function in_grammar is used to validate a string if it is a correct reber grammar string.

That the number of input and output neurons (in the picture 3) match, makes sence. Knowing the current character we want to predict, which is the next character in the sequence.

Since our input characters are encoded as vectors of length 7, we have 7 input features n_in.

Our hidden layer will have 20 neurons n_hid.

We want to predict the next letter, based on the previous letters, so our output will also be a vector of length 7 n_out.

RNNs are very volatile to the vanishing / exploding gradient problem, so here it is very crucuial to initilize weights the right way. The following function allows us to sample weights in a way, so their sum does not get too high.

Function to initilize weights and biases. Here we pass the argument verbose=True, which sololy serves the purpose to demonstrate the normalization.

Based on the graphic for the RNN above and the formulas below, implement the one_step() function:

we could use the fact that only one of our output values is on (1), while the others are off (0) and use the$ softmax $ function. But for simplicity, we'll just use the logistic function.

Now plot the costs executing the cell below. The costs should look like the following: 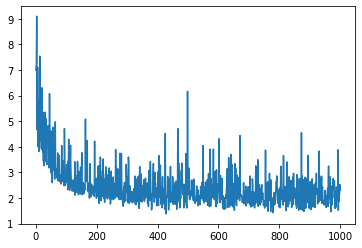 Costs are still high at the end since almost everywhere in the grammar graph we have 2 posibilities for the next character. So even if the network decides for one of the 2 valid character, there is a 50 % chance it does not align with the ground truth data and therefore will be treated as wrong. Nevertheless we can see downwards trend.

Besides looking at the graph for the costs, there is another way to check if our model has learned the grammer. Namely by sampling, which means, we let the network generate outputs, given a starting sequence:

We start by feeding the starting character B at time step 0 to the network, which yields scores for the next character.

Instead of taking the character with the highest score, we treat the scores as a probability distribution and sample a character from it.

If we always took the character with the highest score, our RNN would always generate the same sequence given the starting sequence B.

Write some code to sample a sequence:

Remember to keep track of the generated characters. Use the function sequenceToWord and in_grammar to validate the string.

With the used network and the hyperparameters proposed, your network should produce around 8-9 valid reber grammer strings out of 10.

The code is almost the same as in the cell used to train the network with some differences, e.g.:

Exercise - Learning Reber Grammar - Recurrent Neural Network with Pytorch
by Christian Herta, Klaus Strohmenger
is licensed under a Creative Commons Attribution-ShareAlike 4.0 International License.
Based on a work at https://gitlab.com/deep.TEACHING.